Last Update:2019-11-06 Source: Internet
Author: User
Keywords adb bugreport adb bugreport
Tags android adb bugreport bugreport adb
Developer on Alibaba Coud: Build your first app with APIs, SDKs, and tutorials on the Alibaba Cloud. Read more ＞
What is bugreport, how to use it?
Android system wants to be a full-featured, eco-prosperous operating system, and it must provide a complete application development environment. In application development, the debugging analysis of the app program is the work that will be performed in the daily production process. Android has developed the bugreport tool to make it easy for developers to analyze the entire system platform and all the information that an app has been running for a while. This tool is very simple to use, as long as it is executed in the terminal (linux or win):


A bugreport file can be generated. But there is a problem, this generated file is sometimes very large, can reach 15M+, think about the concept of a file content length of 15M+ for a txt text format, if using the text tool to open the view will be a nightmare . Therefore, google developed an analysis tool called battery historian for android 5.0 (api 21) and above. This tool is used to parse the txt text file and then display it in the form of web graphics. The effect is more humane. More readable.

Of course, the same bugreport data can also have different parsing and reading methods. If you don't like google's battery historian, you have other choices, that is, choose Sony open source ChkBugReport, this tool provides a different from battery historian The perspective of the bugreport file, the interface is simple and clear.

We can clearly see that if the attached parameter is bugreport, it will directly call the send_shell_command function. The code of this function is relatively simple, we will not analyze it. The function of this function is to use the command in the shell to execute the parameters. So we are here to execute the bugreport command.
In the android device, the bugreport command exists in the system/bin/ directory. This is an executable file, so we need to check the implementation of this executable file. The implementation code is in the /frameworks/native/cmds/bugreport/ directory. under: 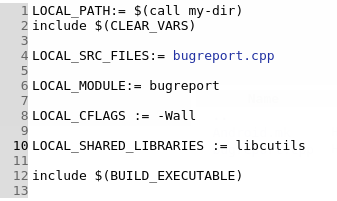 Here we see that the code in this directory will be compiled into an executable called bugreport, which is what we want to find.

The code here is also very simple, as long as a few implementation files, the main function in the dumpstate.c file, this main function we do not analyze in detail here, summarize its main work:
1. Initialize related resources according to startup parameters
2. If the startup parameter has -s (init starts with this parameter), it means that the socket is used, then the socket is started, and the link is waiting in this socket.
3. If the client side (that is, the bugreport process) is successfully linked, initialize the memory to be used and set the priority to a higher priority to prevent it from being killed by OOM.
4. Then use vibrator to vibrate (if the device has this hardware), prompt the user to start intercepting the log.
5. Call the dumpstate function to start the real dump work.
6. After the dump is completed, call the vibrator again to vibrate 3 times, prompting the user to complete the dump.
The above code is relatively long because there are too many modules to be dumped, but the basic logic is still relatively clear. We see that the basic data sources are:
1. System properties
2./proc and /sys node files
3. Execute the shell command to get the relevant output
4.logcat output
5.Android Framework Services information basically uses the dumpsys command to obtain information through the dump function in the binder call service.
Other options for adb bugreport
There are no options for bugreport itself, mainly through commands such as dumpsys. See the battery historian project homepage: https://github.com/google/battery-historian. Here is a summary:
1). Reset battery statistics:

This article is an English version of an article which is originally in the Chinese language on aliyun.com and is provided for information purposes only. This website makes no representation or warranty of any kind, either expressed or implied, as to the accuracy, completeness ownership or reliability of the article or any translations thereof. If you have any concerns or complaints relating to the article, please send an email, providing a detailed description of the concern or complaint, to info-contact@alibabacloud.com. A staff member will contact you within 5 working days. Once verified, infringing content will be removed immediately.

The content source of this page is from Internet, which doesn't represent Alibaba Cloud's opinion; products and services mentioned on that page don't have any relationship with Alibaba Cloud. If the content of the page makes you feel confusing, please write us an email, we will handle the problem within 5 days after receiving your email.

If you find any instances of plagiarism from the community, please send an email to: info-contact@alibabacloud.com and provide relevant evidence. A staff member will contact you within 5 working days.

A Free Trial That Lets You Build Big!

Get Started for Free